“the leading horse is white, the second horse is red, the third one is a black, the last one is a green…” 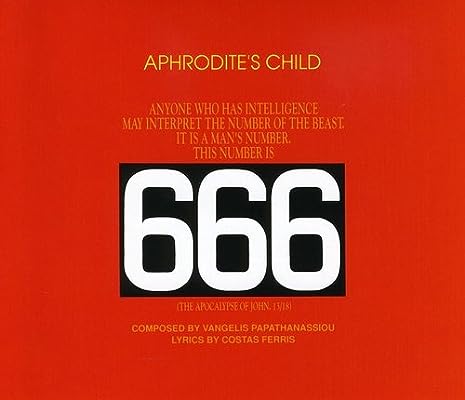 Out of print in the U.S.! Two CD release for this landmark 1971 album by the Greek act led by Vangelis. A concept album about the Bible's Book of Revelations, this edition contains all 24 tracks from ...

[I]It’s obviously ironic, as you cannot “fuck” a system by another system!
Those lyrics were inspired by Abbie Hoffmann’s manifesto “Fuck the System”.
Irony and sarcasm, are the two keys to understand this peculiar “666”.[/I]

"This work was recorded under the influence of “SAHLEP”.

[I]His reaction was more than enthusiastic. He said that the music was “a music of stone” (“C? est oune mouzique de pierre” he said with his peculiar French accent) and reminded him of the church of Sagrada Famiglia of Gaudi in Barcelona. As about the lyrics, he said, they expressed perfectly the yippie movement, and reminded him Durer (the painter of the Apocalypse). He then said that we must introduce this work to the public, by a big international event, a great “happening”, suitable for the greatness of “666”. He said, finally, that if he was a musician and a lyrics writer, this could be one of his great works.[/I]

under the influence of ΣΑΛΕΠΙ.