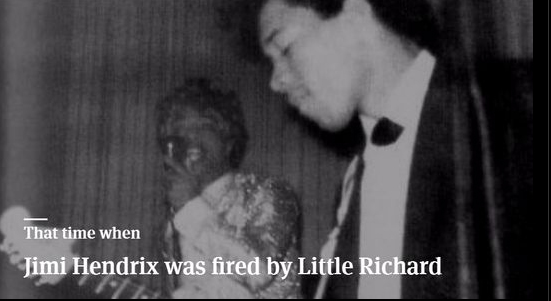 That Time When Jimi Hendrix Was Fired by Little Richard

Never give up! Jimi didn’t.

Elvis was the King, Chuck Berry was the poet of Rock, but Little Richard Penniman, the self-proclaimed “architect” of Rock N’ Roll was indeed just what he said he was. He was the 1st to make that sound, the 1st to record that sound, the 1st to be dangerous. By any reasonable standard, that makes him the absolute, undisputed “Architect of Rock”.

Over the years I’ve thought a lot about him. Years ago he lived at the Hyatt House on Sunset. I was living there as well down the hall from him, and we would talk from time to time. The funny thing was, we never talked about music. With the exception of just a few times, the conversations were always about God. This was at a time in his life when he was actively preaching the Gospel. One time in a restaurant, a car salesman he knew came over to our table. He said: “Rich, why don’t you come by? I know you always did like a fine automobile…”, and Richard stopped for a second and said: “that’s before I knew Jesus!”

He was never ashamed or shy to proclaim the name of God.

The struggles he wrestled with were greater than anyone I’d ever known or even heard of before. You’d be hard pressed to find anyone else who’s ever lived, that had the extremes he had with radical sin on one hand, and a genuine love of Christ on the other. He was the real deal in every way. If you ever heard him preach you’d know what I mean. He once sang: “you keep on knocking but you can’t come in”. Yesterday, I’m certain Heaven’s door needed no knocking.

He’s now at home with the Lord… Amen!